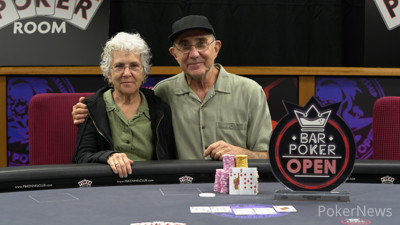 The Bar Poker Open Main Event at the Florida World Championship has come to an end and Phil Hoff is the winner after he defeated Stephanie Devito in heads-up play to win the $40,000 top prize.

Hoff beat out 39 players that survived two opening flights to take down the tournament after he dominated the final table. The tournament drew 446 players to generate a prize pool of $126,648. Devito takes home $22,537 for second place after a great run at the final table that was buoyed by a very large and vocal rail of supporters.

This was Hoff's third Bar Poker Open cash, and it improves on his previous best finish of second place for $28,775 at the 2019 BPO National Championship at the Golden Nugget in Las Vegas.

"I started playing shortly after retirement with a local senior's group and at Bar Poker Open events," Hoff said in his post-win interview with PokerNews. "Since then, I have done a lot of studying."

Hoff has put his studying to good work and he has now earned the largest first prize in Bar Poker Open history.

"I study a lot of Jonathan Little's training programs and I've been working hard on learning. I am a member of his website."

Hoff is a member of the New York Free Poker league, which operates out of eight locations throughout New York. He qualified for the Florida event back in July and came to the Palm Beach Kennel Club in the ninth spot on the league's rankings leaderboard.

John Sarappa was out in tenth when his ace-queen couldn't improve against Johnny Kelly's pocket tens and the tournament took a break for interviews and final table preparation before the final nine convened to play down to a winner.

Jhonny Ortiz was out in ninth when his king-ten shove ran into Kelly's pocket aces, while James Boynton wasn't far behind in eighth when Ellen Schirmer spiked a pair of nines on the river to beat his Big Slick.

Susanne Spritzer was next to go in seventh when Hoff made a pair of jacks on the river to beat her suited ace-four for the first of his many final table eliminations. Action slowed down for the final six and they battled for an entire level before Schirmer's ace-nine fell to Devito's ace-jack in sixth place. Durwood "Doc" Flournoy was right behind in fifth when his suited ten-seven couldn't improve in a short stack shove against Hoff.

Hoff kept going with yet another knockout when his pocket jacks held against Kelly's shove with ace-king. It was just minutes later when he picked up another one when Nick Sims shoved with a suited king-jack but Hoff once again held on with ace-seven to win a hand where no one paired the board.

The rail reached a fever pitch as Devito's supporters drowned out the entire room with their support. The New York No Limit league was out in force with several members playing well throughout the weekend, but Devito was their standard bearer and they made their presence known throughout the final stages of the tournament.

Heads-up play commenced and Devito quickly closed the gap with well-timed several aggressive bets against Hoff's large chip lead, but her aggression got the best of her when she couldn't get Hoff to give up his pair of tens for a large pot. The big moment came just a few moments later when Devito shoved with two pair and received a call from Hoff's one pair, but he picked up the better hand when his second pair fell on the river for the big win.

This wraps up coverage of the Bar Poker Open Florida World Championship at the Palm Beach Kennel Club in West Palm Beach Florida. Be sure to keep it with the PokerNews team for live updates from all of your favorite tournaments around the world.